Posted by Emily Kane
Our team has a soft spot for furry friends (we have 12 pets!). They help keep us sane amongst a busy studio schedule, make us laugh, keep us entertained at the office and keep our feet warm under our desks. So we thought we’d introduce you to the 4-legged team who give us their unconditional love. 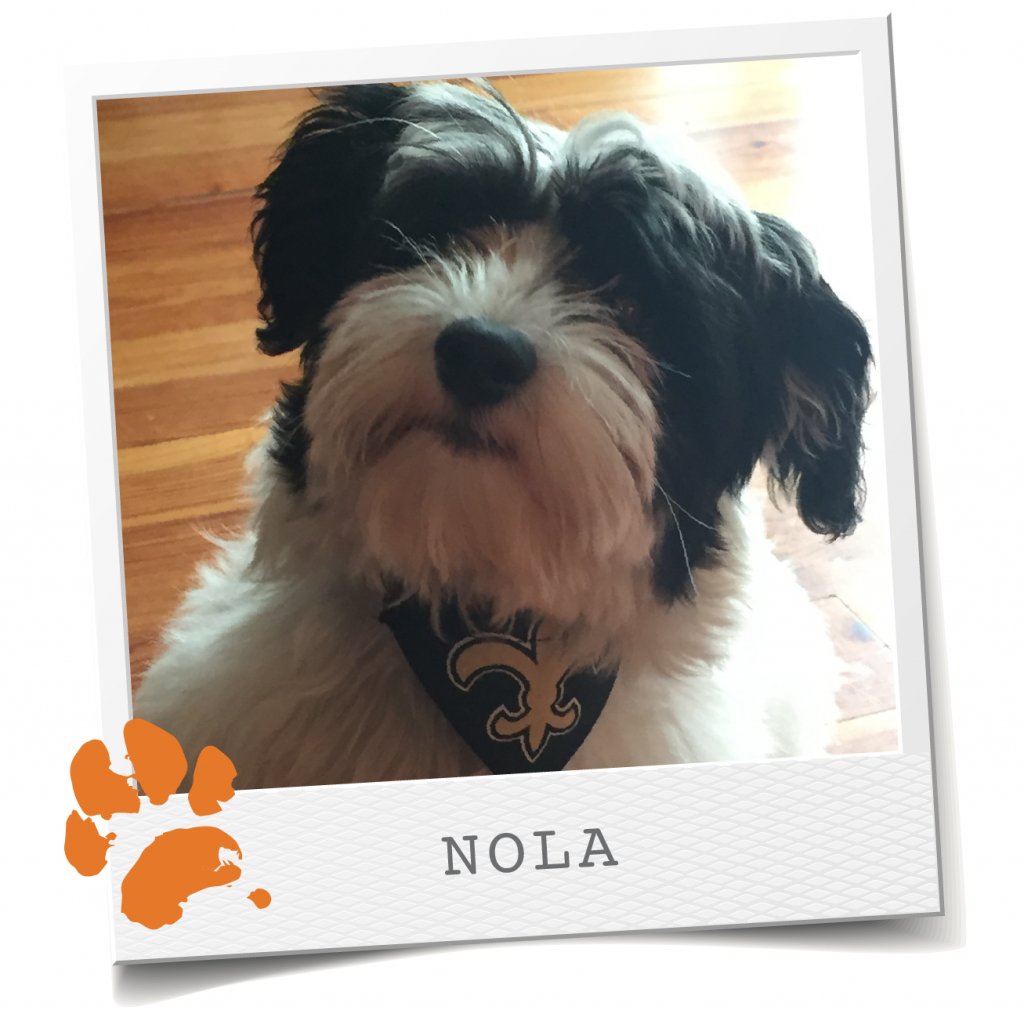 “Nola is a 4 month old Havanese. She came home to us in mid-December. We named her Nola, in honor of one of our favorite cities, New Orleans. Nola loves to go to the beach and absolutely loves people, definitely a “people puppy”. It’s hard to discipline her because she’s so ridiculously cute!” – Lauren I. (Nola’s human) 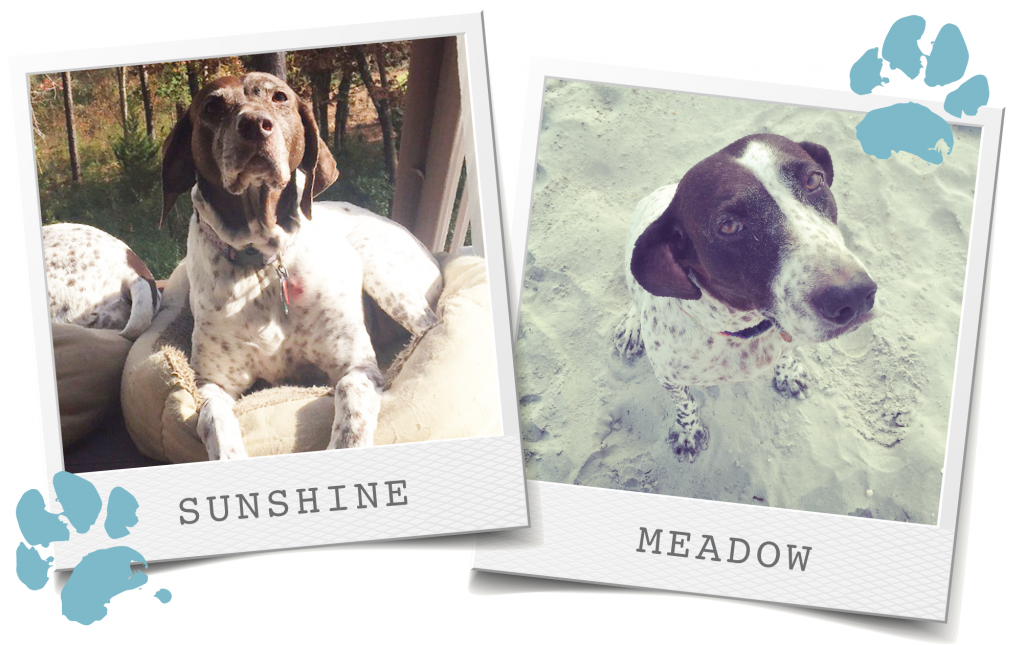 “Sunshine joined our family shortly after we moved to Wilmington in 2004. She was rescued from Dogs Hope English and GSP Pointer Rescue in Charlotte. Sunshine is about 15 years old and still full of energy. She loves running the trails and chasing a ball. We rescued Meadow from Southside SPCA in 2010. She is about 10 years old and thinks she’s a lap dog. She loves giving kisses, snuggling on movie nights and going to the beach. Meadow was given her name by the rescue group and when we found her, we thought her and Sunshine were meant to be sisters! Now they are inseparable.” – Lindsay (Sunshine & Meadows human) 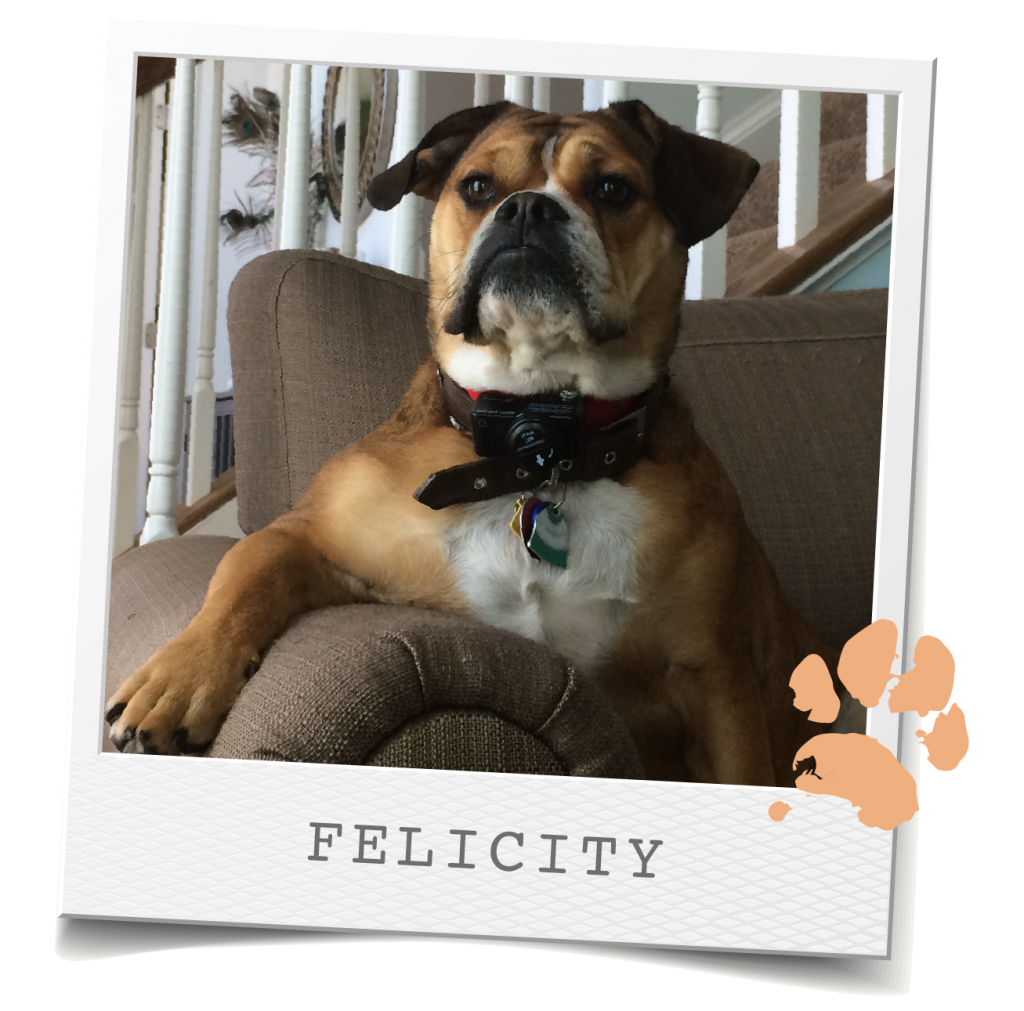 “Felicity (Lici for short) is a 3/4 English Bulldog 1/4 Beagle (they call them Beabulls) She is the funniest most personality having dog I’ve ever seen. We call her a people because she honestly thinks she’s a person! She’s 2-1/2 years old and she has had a rough way to go at times. She had a mastel tumor that had to be removed last year and this year she had to have surgery for a luxating patella. Definitely not an inexpensive dog by any means lol! But we love her and she’s a huge part of the family!” – Dave (Lici’s human) 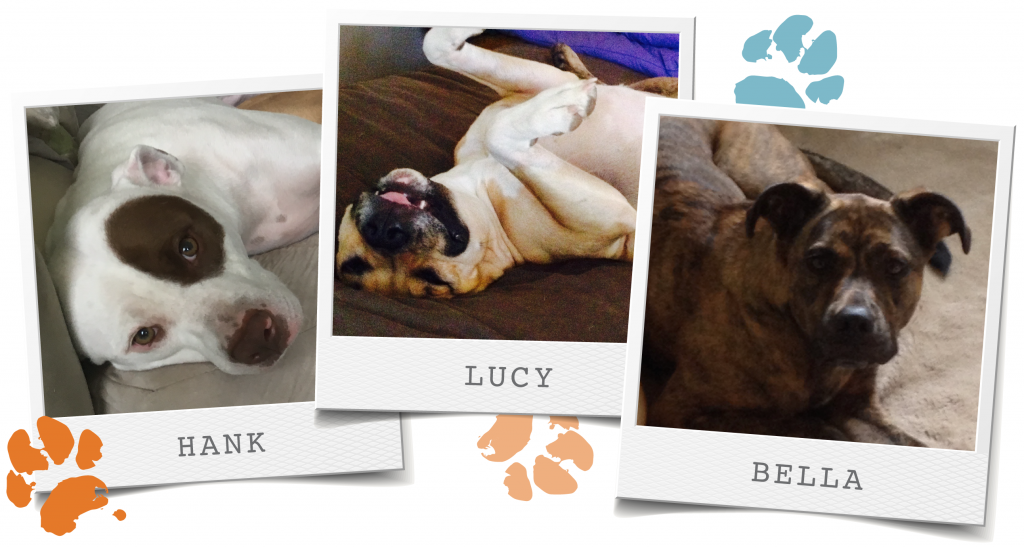 “Hank is the baby in the group, not quite 2 years old. While Hank isn’t a permanent fixture in the McCall household, he’s staying with us indefinitely and has grown especially fond of me. Out of the pack, he’s the one that is usually by my side. Without fail, whenever anyone is giving any type of affection he has to be all up in the mix.  Hank has a sweet demeanor, but still hasn’t quite figured out that shoes and hats are not toys to chew up. He’s a work in progress, but still we love him!

Lucy has a sweet soul and loves snuggling with her Dad. She is the exact opposite of the dangerous pit bull stereotype, as sleeping in and long, loving gazes are her favorite past-times. Lucy’s a full-blooded AKC registered American Staffordshire Terrier, which means she is no stranger to health issues. She was diagnosed with a slew of allergies as a puppy…including an allergy to humans! Last year she had surgery on her right knee, and surgery is expected on her left very soon. She is the most stubborn of the bunch, and does not have a great sense of self. She often tries to cram into spaces way to small for her thick frame. A bull-in-a-china-shop mentality for sure. But despite her “broozer” moves, she is the most animated and emotional of the pack.

Bella came to us as a rescue, from a family who didn’t fully appreciate her loyal nature. She was very skittish when she first joined the family, as I found her running the streets and pulling all sorts of evasive moves. But over the last three years she has opened up, become much more affectionate and comfortable around all types of people. She is extremely smart and the most likely to find an escape route from the backyard. There have been a couple times she’s broke out, but each time she’s back on the front porch within the hour. A testament to her loyalty and strengthened bond. Of the pack, she picks up tricks the fastest and is the only one able to master the game of fetch. While she may have been shy around people early on, there is no doubt that Bella is the pack leader.” – Lauren M. (Hank, Lucy and Bella’s human) 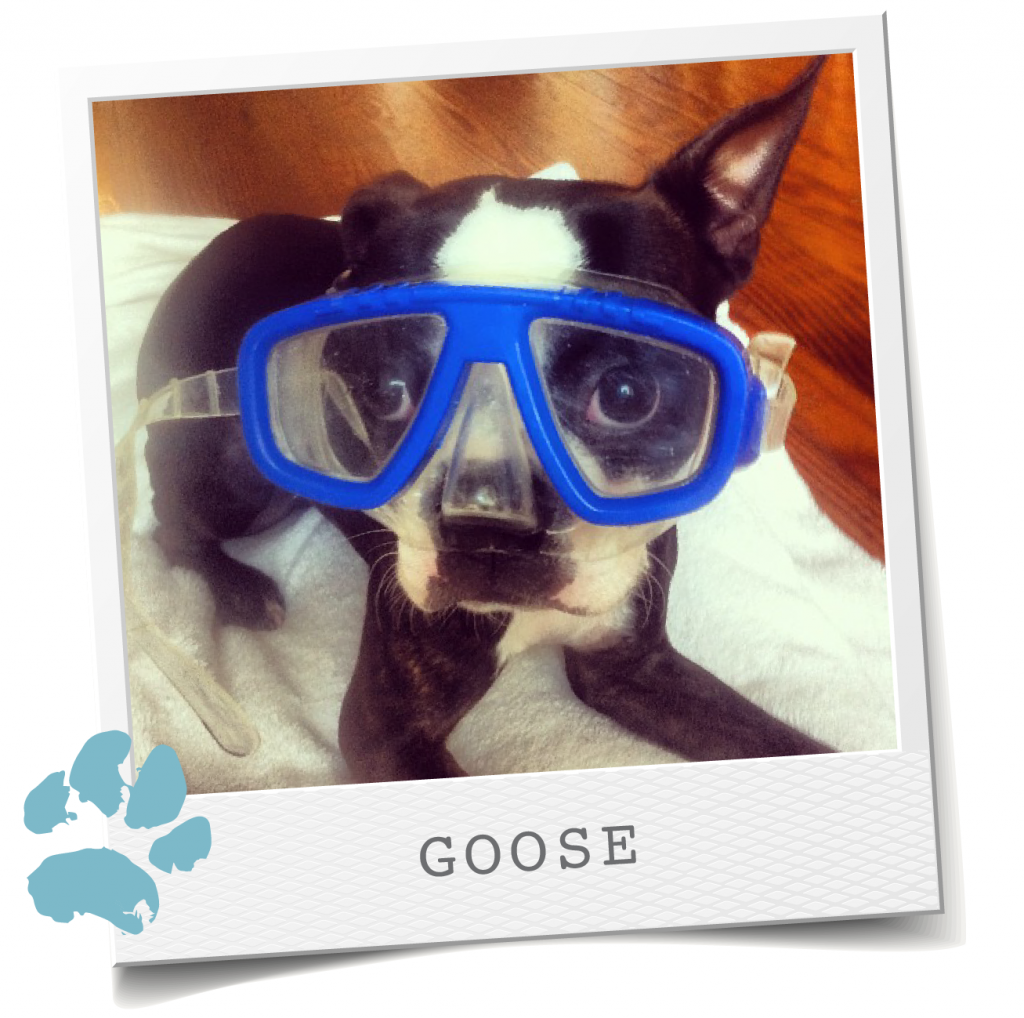 “Goose is a 4 year old Boston Terrier with endless energy and a love for adventure. He loves belly scratches and basking in the sunshine. He is passionate about tennis balls and rolling in freshly cut grass. Goose loves to burrow under warm blankets and usually sleeps past noon. He is the biggest goofball and we love him.” – Emily (Goose’s human) 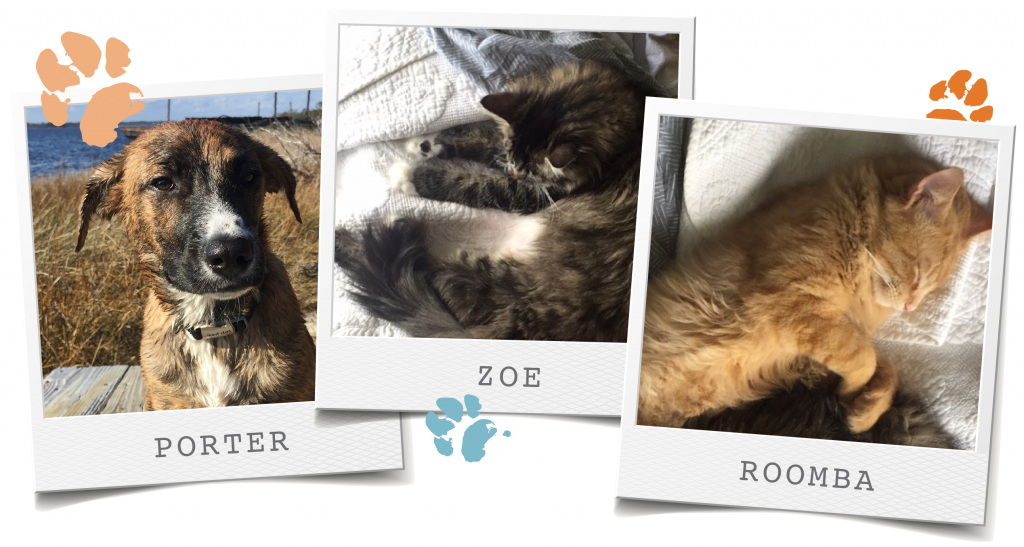 “Porter is just under a year old and the most happy go lucky, curious pup I’ve ever met! He is my little hiking companion, loves the great outdoors and everyone and everything. Zoe was my first pet. I got her when I moved into my first apartment out of college. She’s pretty and knows it, and loves to chat with me while I shower (is that a weird thing to include? She just literally sits outside the shower meowing at me until I’m done.) When Zoe started following me out of my apartment every time I’d leave, I decided it was time for her to have a friend. It was either another cat (while I was still in an apartment), or a roomba vacuum to keep her occupied. Roomba is the sweetest, and I wake up every morning to all three cuddling with me in bed!” – Aynsley (Porter, Zoe & Roomba’s human) 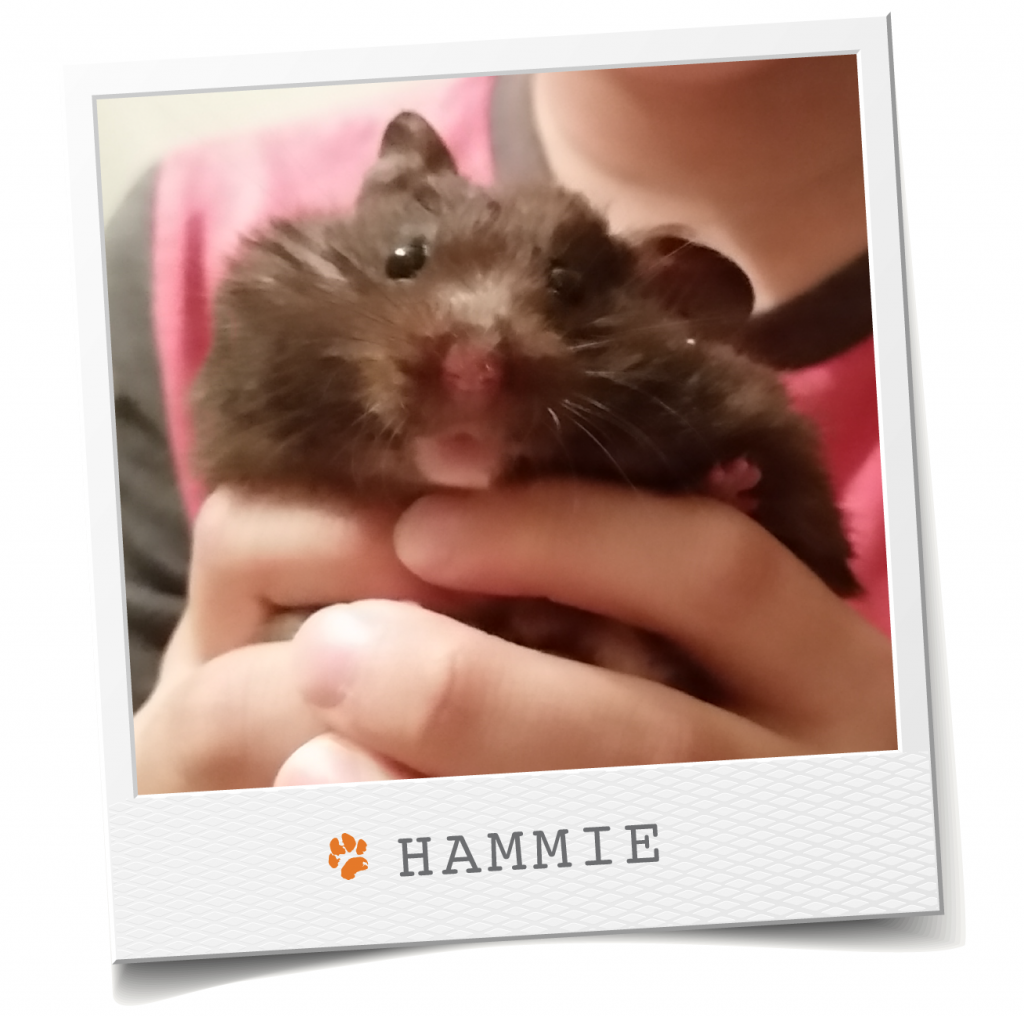 “She’s a she, about a year old. Likes to eat peanuts and tomatoes. I don’t think she’s ever run on her wheel, but likes to roll down the hall in a green exercise ball. Has a lazy streak.” – Kristin (Hammie’s human)